once again catching up. I don't know where the days go, now we are free from covid restrictions groups have started up again and days just seem to be busy and go by super quickly.

Some things I have been doing 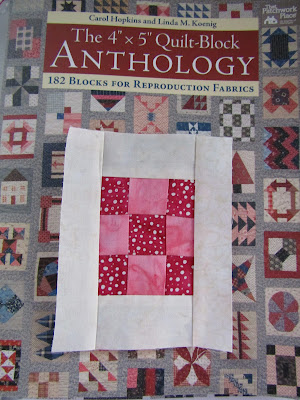 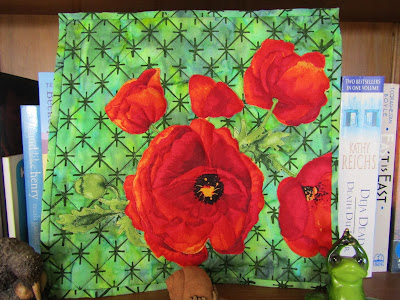 I decided to make a poppy mini quilt, I don't know why, maybe because it was ANZAC day coming up, although poppies are more for Remembrance Day I think. I just had the urge! I am happy with how it turned out. I have a lot of poppy fabric bought over time for Aussie Hero quilts, one day I will get to use it. 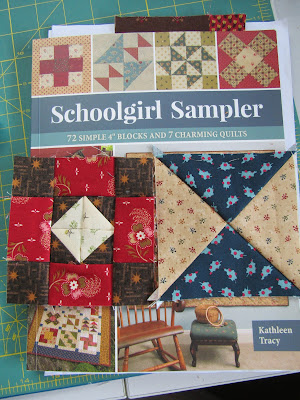 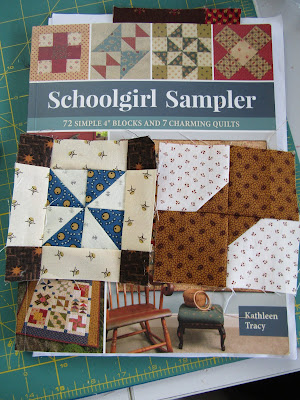 Four Schoolgirl Sampler blocks were made last week, I am still way behind but will get there in the fullness of time! 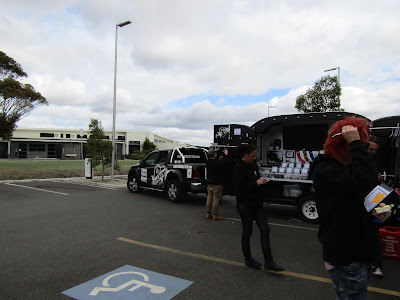 Two Saturday's ago I went over to the Leopold Library to but the book Dear Mum and meet Samuel Johnson, at one stage he rode his pink unicycle around the car park, he is still fundraising for breast cancer which took the life of his younger sister Connie. 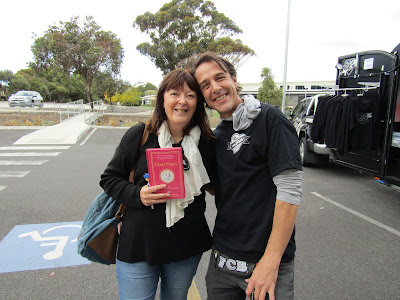 He is such a friendly person and has a chat to you in a very quiet voice up close, he said he was a bit of a goose in his younger days and now makes much better use of his life.  The whole atmosphere is one of happiness around him, his sister and partner and anyone working with him, when I said that to him, he replied well no one wants to come and see a miserable person! 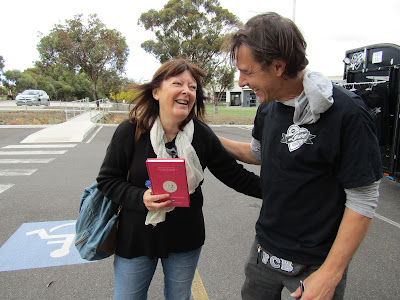 We had a laugh and then he moved on to the next people in the queue. I was impressed how Samuel gave everyone what felt like their own private conversation.
I was speaking to one of the library staff who was in front of me in the queue, it turns out she went to Gisborne Secondary College where I used to work, although I don't' think we were there at the same time and she didn't often use the library. Another staff member came out to have a chat and she used to manage the Gisborne Library for the Macedon Ranges Library Corp and knows the woman I used to job share with, it is a very small world! 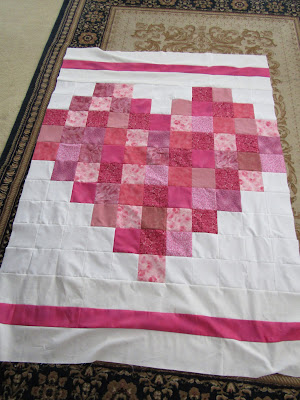 This week I put together a pink pixilated heart quilt top 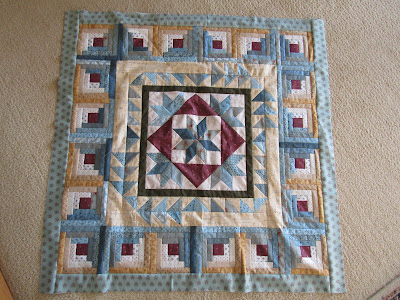 Put a border on Bettys Medallion 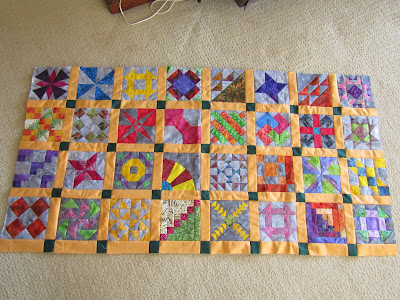 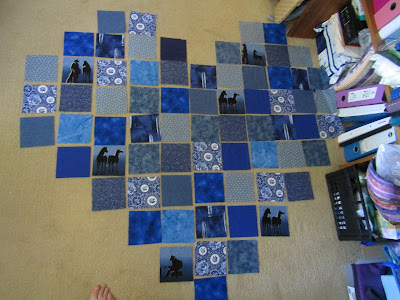 Yesterday I cut and laid out a pixilated heart blue top 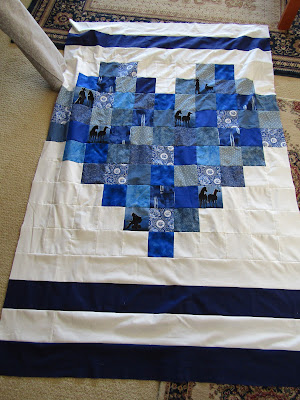 and by last night it was sewn together. Today I need to cut backing and wadding and do some sandwiching, but first the washing need to to be hung out, it is sunny here today and windy so drying should be no problem.
Happy stitching. 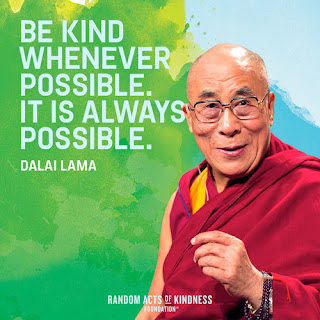 What a great post! I love seeing all your blocks and quilts. It looks wonderful to be out and about without a mask?

That should have been !, not ? after mask. What a relief that must be.

A lovely post Sue & you sure do get to work on a variety of crafts. I love your poppy mini quilt & I should do this as I have quite a bit of poppy fabrics I feel. That book author looks such a lovely young man - that is a beautiful pic of you both. Your pixelated heart quilts are just beautiful!! Happy Weekend to you Sue xx

Your poppy quilt looks lovely. You've been keeping yourself busy.

Your quilting looks wonderful, as always. Love the poppies and that pixelated heart. Glad you were able to meet up with that wonderful author, he sounds like a very remarkable person. Have a great May, take care! Hugs, Valerie

Lots of lovely things happening there - the medallion is lovely and the sampler quilt is coming along beautifully. xx

It certainly is a small world and you bump into people everywhere you go. Hubs reckons I know the whole world as I am always stopping off to talk to people that I meet when out and about. Your sampler blocks are progressing at a great rate. Love the pixilated heart quilts....for anyone special?

I didnt know you worked at Gisborne Secondary. What years were you there. Maybe at the same time as John.
You are very productive. I see Samuel as being a very nice natured person and so funny too.

Sounds like a lovely guy. Yes, it is a small world. 6 degrees of separation is so true. Love your poppies! Very vibrant. All your blocks are lovely as are the quilts. I particularly love Betty's ( can't remember the name). Take care out there. I am still not rushing to go anywhere and I still wear a mask in supermarkets and big shopping centres.

you have done lots of wonderful sewing work on the different projects.... I love the look of the medallion .. growing nicely... great to have met SJ... he does a great job...
Hugz

That was a great post Sue... & lovely to meet Sam with you...xox

You’re right, time seems to be flying by, now that we can get out and about again. Nowhere near as much time for stitching. You are still making great progress on all your projects. It’s a great photo of you and Sam. How nice to meet him.

What a heartwarming post, Sue. The warmth and the positivity of his words - so touching. Be it blue or pink, here is wishing that the hearts are full of love and bring joy and comfort. Hugs to you.

Oh wow! I love how you used the horse fabric!!! 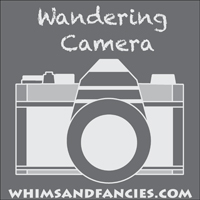